The men who invented computers focused primarily on the hardware. But the women who became involved during World War II saw early on the importance of programming. They developed ways to code the instructions that told the hardware what operations to perform. In this software lay the magic formulas that could transform the machines in the marvellous computers we use today. We seize Computer Security Day to honour computer pioneer Grace Hopper.

On International Computer Security Day, it is appropriate to pay tribute to Grace Hopper, one of the most prominent female computer scientists of last century and originator of the terms ‘bug’ and ‘debugging’. She came up with the term while she was working on the Mark II at Harvard in 1947. The computer malfunctioned and on opening it, Grace’s co-workers found a moth, squashed between the two power panels.  In her report, Grace wrote that this was the first time she had found a real bug.  The remains of this moth can still be viewed at the Naval Surface Weapons Centre where Grace’s report is kept. 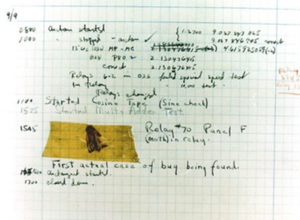 Grace Hopper (1906-1992) was the first woman in the US with a PhD in mathematics (Yale) and she was the first woman to reach the rank of admiral in the US Army.  She was one of the first computer programmers and co-founded the COBOL (COmmon Business-Oriented Language) programming language. She was responsible for the first compiler: a computer programme that ensures that source code written in a programming language can be executed by a computer so that anyone can use it.  Grace Hopper received much recognition and won several awards for her work including the National Medal for Technology in 1991.  In 2016, President Obama posthumously awarded her the Presidential Medal of Freedom: the highest civilian award in the US given to individuals who have made meritorious contributions to the security or national interests of the United States, to world peace, or to cultural or other significant public or private endeavours.   Amazing Grace.

How does a brilliant mathematics professor at an elite college (Vassar college) in the US become a computer specialist and an admiral in the US Navy?  Answer to this question : Grace Hopper had a great-grandfather who was an admiral who had fought in the US Civil War.  During World War II, Grace wanted to remember her  great-grandfather and enlisted in the WAVES (Women Accepted for Volunteer Emergency Service), a division of the US Navy for women. She was rejected because she was too old (36).  Grace persisted and was allowed to work for the Navy with the Mark I, the first digital computer designed by Howard Aiken.  Later, Grace also wrote a manual on how to use the Mark I.

After the war, Grace Hopper remained in the service of the Navy and worked to make computers more user-friendly: she invented the compiler programme and she dedicated herself to spreading the use of COBOL.  She co-developed UNIVAC, the first computer for commercial use in the 1950s.  In 1966, she had to retire but a year later the Navy recalled her for active duty.  She developed other computer programmes (FORTRAN) and in 1986, at the age of 80, she received the rank of admiral and retired for the second time.  After her retirement Grace Hopper went on lecture tours around the country, speaking at engineering forums, colleges, universities passing on the message that managers shouldn’t be afraid of change. Her favourite group to address was young people around the ages of 17 and 20.

In most of her speeches, Hopper would mention the importance of change. “I find it in general that human beings are allergic to change. They do not like change. They’ve learned something, they’re perfectly satisfied doing it, and you come along and say, you’re going to do it this way. People push it away. They are very naturally allergic to change.”  Hopper dreamed of living to the age of 94.  She wanted to be here December 31, 1999 to end the century in which she had lived through entirely. Grace Hopper died in her sleep on New Years ‘day, not in the year in which she wished but in 1992. She is buried with military honours in National Arlington Cemetery, the famous military cemetery where US President John Kennedy is also buried.

Grace Hopper was born Grace Brewster Murray.  She always used the surname of her husband  whom she divorced in 1945.

Every year, the Grace Murray Hopper Award is presented to a computer specialist under the age of 35 who has made an outstanding contribution.

Every year, The Grace Hopper Celebration of Women in Computing (GHC) takes place.

Amazing Grace, how sweet the sound ………

Our Chair, Jan De Blauwe, extends warm New Year's greetings to all the Coalition members. In his address, he reflects ...
Read more
The men who invented computers focused primarily on the hardware. But the women who became involved during World War II ...
Read more
This year, the Cyber Security Personality of the Year Award Ceremony was presided by Mrs. Séverine Waterbley, President of ...
Read more
The theme of the 2022 national campaign is protecting your mobile devices. Mobile malware is on the rise while more and ...
Read more